My family joined with our church in a three week Daniel Fast this past January, and I am grateful for the mighty move of God that took place during the fast.  Most of us experienced major breakthroughs as a result of consecrating that time in prayer and Bible study, while bringing our flesh into subjection to the will of God.

I will also say that I missed my meat!  For those of you unfamiliar with a Daniel fast, it is abstaining from meat, dairy, processed grain and sweeteners.  Thankfully, our family had already adopted a healthier, organic, less gluten-filled diet, so it was just a matter of removing meat.  Well, I can tell you that the meat issue was tough for me.  I don’t believe a meal is a meal without meat on the plate, so I have been living a meat filled week this week.  I have been eating bacon like it was going out of style and last night I made what was supposed to be our last meal before the fast, but it never happened, COCONUT SHRIMP.

Here’s what you need:

About a pound of peeled, deveined large or jumbo shrimp

Battering up the shrimp:

Combine the egg, beer, flour, baking powder, seasoning and cayenne pepper.  Those of you familiar with my blog know that the rule of thumb for cooking with alcohol is to make sure you like the taste of it.  I can’t stand beer, but there are some that I find less offensive than others.  My preference is Moosehead, but in my community, you can’t purchase a single bottle of Moosehead, you have to purchase a six-pack.  As I don’t intend to use beer in the near future, I purchased this huge can of Fosters, then threw the rest out.  I know, what a waste, but oh well!

Next is setting up the breading station.  Dip the shrimp in the batter, allowing the excess to drip off, then roll in the coconut flakes.

I put them in a dish then allowed the shrimp to set with the coconut in the refrigerator for at least an  hour. 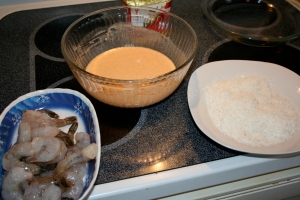 For the dipping sauce, I lifted a recipe from allrecipes,com, my favorite culinary site (yes, I like it even better than foodnetwork.com!):  http://allrecipes.com/recipe/dipping-sauce-for-coconut-shrimp/

You just combine ½ cup orange marmalade, 2 tsp coarse mustard and 1 tsp horseradish and let it sit in the fridge for at least an hour.  It went perfect with the shrimp!

The only thing left to do is to fry up the shrimp.  Make sure the oil reaches 350 degrees then fry the shrimp until they are golden.

It was amazing!  I know it is rather decadent, which is why I paired it up with a quinoa salad.  Dinner was incredible!!